Today I took a quick look at the ex’s (the most recent ex) Facebook profile. I got curious after seeing him at the intersection near the office. I already knew he was in town, a common friend told me the other week. God I hate it when common friends tell me news about him. I told myself that it was going to a quick look only. And I lied. I dug deeper into the post and the comments. 😀

Photos of him and his girlfriend (of 4 years) is all over his account. They look happy together. And I kind’a feel a certain kind of peace knowing that I don’t feel the same resentment that I used to. Thank God for that. Reading the comments, it seemed like he’s really changed and he’s a new person. Not the cheating asshole I spent years with. It’s almost believable.

A few months earlier, around the same that some of the photos were taken, he reached out to me using his other account. And this is how the conversation went. 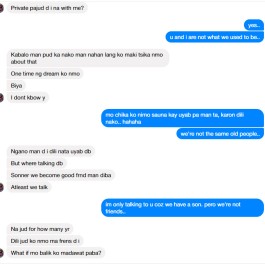 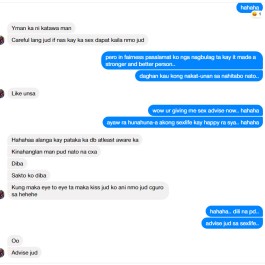 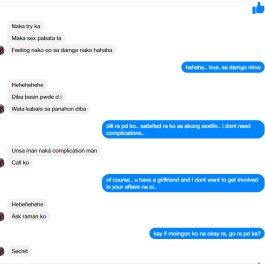 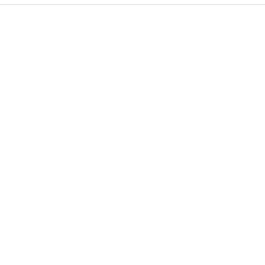 Basically, he was asking whether I’m dating someone now and are we having sex. And he was asking if I was willing to take him back if he came back. I realized that the direction of the conversation was pointless, I stopped.

I don’t know if the guy has really changed or not. But if he did, I’m honestly happy that he finally found the person who made him change for the better. I was never going to be that person. Even if I move the mountains for him, if he was not willing to change, it will never work. It has to come from him, that willingness to become a better person.

Relationships, man they’re hard! I don’t even think I’m ready to get into one. I mean you know, you gotta find that person who would make you want to be a better person. Or someone who’ll bring out the best in you but will stick around when you’re at your worst. I don’t know if someone like that exists anymore but I would like to believe that there’s still a lot of them around.

I promise I’m not going to judge, I have absolutely no idea what their relationship is like and I don’t intend to find out either. See! It is never a fucking good idea to look at your exes Facebook accounts (unless you’re now friends, and I do have one or two exes that I am good friends with).

I’m out of coffee now so that’s it for the day.