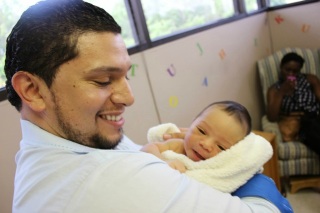 I never met my father. He abandoned my mom days after I was born. As I got older and understood more about life, resentment and anger eventually crept in – feelings that could have led me down the wrong path in life, if it wasn’t for my amazing mother.

A single mom that pulled double duty to make sure that I never lacked anything. She did it all and although she was the best and did all she could, it never seemed to fill the hole in my heart where a son’s love for his dad should be.

I still remember the Boy Scouts camping trip that I declined going on because I knew that all the boys were taking their dad and I was the only one with no dad to take along.

Growing up I never attended a baseball game or basketball game because it just didn’t feel right to ask mom to take me to a sporting event, although I knew she would take me in a heartbeat if I asked her.

Transitioning from a boy to a man was a challenge for me. I drove my mother through hell with my erratic, irresponsible and immature behavior, not having a male role model to look up to and to emulate in my life took its toll.  This might come as no surprise since research shows that fatherless children are more likely to develop behavioral problem, commit crimes, do poorer in school and also more likely to commit suicide than those who grow up in a home with both their mother and father.

In my early twenties, I experienced several life altering events that led me to a major epiphany.

I decided from that moment on that I did not want to be a statistic. I promised myself that it was time for me to become a man. A real man!

When I made the decision to rise up and become a real man my life changed, things that were out of order before seem to just fall into place. Although, it’s an ongoing challenge to walk the path of a real man it’s the challenge itself that forges you with the character and perseverance that is needed to become a successful man, husband, father and leader.

Part of becoming a man is also learning to forgive, so although I never forgave my father face to face…I did forgive him in my heart.  But it’s funny, although I forgave, I never forgot.

On June 7, 2013 – my first child, Elijah entered the world. As I held my son for the very first time and felt an overwhelming love for this human being in my arms, in the back of mind I thought about my father and instead of feeling angry or resentful, I felt gratitude.

Thank you dad for not being there for me.

And the empty hole that I had in my heart for my father’s love is no longer empty, it’s now been filled with the unconditional love for my first born son Elijah.

Originally posted on Why growing up without a dad was the best thing to happen to me!

This is a blog about our daily lives. Pasensya na, some content have Bisaya and Tagalog sentences. Some contents are useless mumbles while you might find some of them really helpful. Saksak sinagol na ni, we got content about coping up with single parenting, travel, processing government documents, Korean drama recommendations ug kabahin sa gugma.